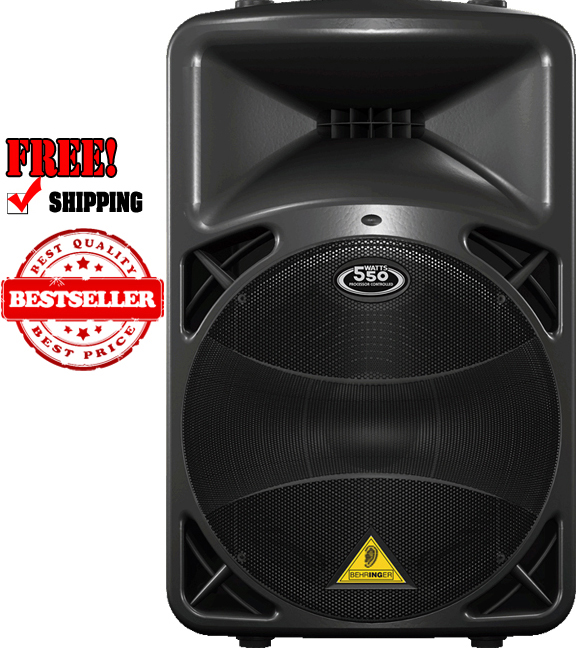 One of the coolest things about active loudspeakers is the lack of all the backbreaking racks of amps, crossovers and EQs that are often required to make passive systems sound almost as good. But that comes with a trade-off —that extra weight is transferred to the loudspeaker, making it difficult for a single user to heave all that mass onto a speaker stand. By utilizing switch-mode power supplies and Class-D amplifier topology, the new EUROLIVE B312D and B315D loudspeakers provide 28% more output power (550-Watts) and still weigh 10% less than our best-selling B312A/B315A systems.

Sound quality is also improved, thanks to an integrated sound processor, which provides total system control, dependable protection of the transducers (woofer and tweeter) and virtually eliminates distortion—even at extreme operating levels. In addition, both models feature an Ultra-Low Noise (ULN) MIC/LINE input with LEVEL control and a dedicated 2-band EQ (HIGH/LOW) for simple, yet effective tonal control.

What is Class-D Technology?

Instead of operating relatively continuously like Class AB circuits, Class-D amps switch on and off thousands of times per second, delivering power only when needed. In other words, the amplifier is either fully on or fully off , which significantly reduces power losses from the output devices given off as heat. Less heat means our amps don't need massive heat sinks, and that means we can make them lighter. Our no-compromise design means your EUROLIVE D Series loudspeakers will deliver full power with incredible fidelity all night long, without the need for lengthy rest cycles.

When used in conjunction with switching-mode power supplies, which don't require huge and heavy transformers, our Class-D amplifiers provide tremendous dynamic punch and superior fidelity. The resulting speaker systems are much lighter, making them easy to transport and set up.

Dynamic processing is one of the best ways to maximize output without sacrificing sound quality. The D Series' built-in circuitry automatically adjusts program content, allowing the loudspeaker to operate at extreme levels. It accomplishes this by reducing bass output slightly as you approach the limit of the transducers. This frees up LF (Low Frequency) amp and transducer resources, so that higher overall volume can be realized. It's like having a tiny soundman inside each cabinet constantly monitoring and tweaking output parameters.

With just a single D Series loudspeaker and a microphone, you can set up an instant PA system— and you don't need an external mixer to do so! Thanks to the built-in mic preamp, you can connect any dynamic mic directly to the input and raise and lower the volume with the Level control. Just plug in the mic, place the speaker on a tabletop or standard speaker stand, and power up. It's that easy. And if you need more coverage, you can use the convenient LINK OUTPUT XLR connector to add more active loudspeakers.

You can even use a pair of D Series enclosures for stereo playback of your MP3, CD or old-skool cassette deck without any additional hardware. Just plug the appropriate stereo "breakout" adapter into your deck's output jack and run the cables to the ¼" inputs on each loudspeaker. Set the Level and EQ controls the same on both enclosures. Voilà, instant party!

Thanks to their trapezoidal design, D Series loudspeakers can be laid on their side to provide the ideal angle for onstage monitor wedge applications. Their extraordinary fidelity and frequency response make them a favorite of vocalists and instrumentalists alike. Hookup is simple, requiring only a single XLR or ¼" cable from the monitor send on your mixing console and, of course, power. Additional monitors can be chained together via the XLR LINK OUTPUT jack on the rear panel.

While some of our competitors are content to buy ready-made transducers and plug them into their boxes, we custom-design and build ours from scratch. Not only do we wind our own voice coils, we process the paper pulp into cones and machine every component that goes into them. This enables us to control the quality and make better components, like the long-excursion LF transducers and state-of-the-art 1.75" titanium drivers we deploy in each and every B315D and B312D enclosure.

The EUROLIVE D Series was built with extended low frequency handling in mind. With a tuned port, internally braced, injection-molded enclosure, each model's custom-designed LF transducer really cranks out tight low end. Keep in mind that bass response varies according to LF transducer size, so the larger the speaker, the more bass you will be able to generate.

You'll love the sheer accuracy of these loudspeakers. More than a year went into the creation of the exponential horn/titanium-dome compression driver combination that not only does justice to loud rock and dance music, but CD Player Connecting a Music Player Connecting Multiple Loudspeakers XENYX XL1600 Continued on next also satisfies audiophiles with its musical timbre and attention to detail. And for spoken word, singing or acoustic instruments, EUROLIVE D Series loudspeakers are unrivaled for their articulate and complex harmonic detail. In fact, many customers think it's the most natural-sounding speaker they've ever heard at anywhere near the price.

See your BEHRINGER dealer today for more information, which is also a good time to give the B312D and B315D a listening test—against the competition and against each other. Judge for yourself. And then own BEHRINGER with money to spare.