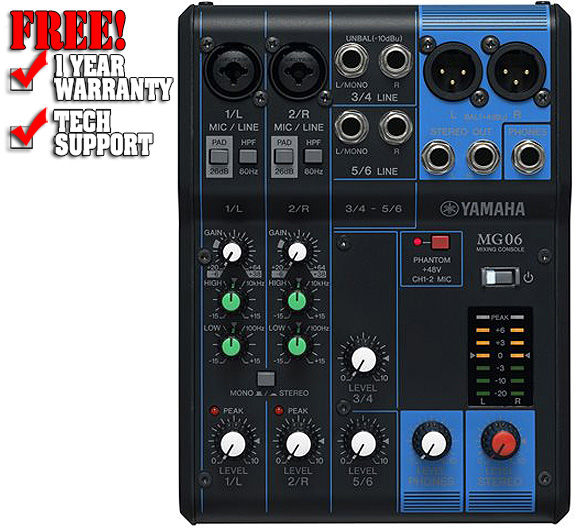 TWO YEAR FULL WARRANTY. ONLY $5 A YEAR FOR FULL PEACE OF MIND. ENJOY YOUR EQUIPMENT WITHOUT WORRY. PLAY WITH IT AND IF ANYTHING IS WRONG, IT WILL BE FIXED. Details

Road Tough. Studio Ready.
For a more precise control and enhancement of your sound, XU models of the MG Series come equipped with a suite of Yamaha's renowned SPX effects. Featuring high-resolution Chorus, Flanger, Distortions, Reverb and Delay, all with editable parameters, these are the same multieffects processors used on Yamaha's high-end mixing consoles, giving you the tools you need to elevate your mixes to a higher plane.
When was the last time you heard guitar without EQ or a completely unprocessed vocal on one of your favorite songs? Probably never. Yamaha mixers are famous for their flat response and sonic purity, but it often takes more than a perfectly-captured instrumental performance or vocal to achieve a professional-sounding mix. Equipped with some of the same state-of-the-art functionality featured on Yamaha's high-end consoles, the MG Series gives you the tools you need to produce high quality sound that is uniquely your own.

1-knob Compressors
Compression plays an essential role in just about any recording or sound reinforcement environment by altering the level of dynamics of an audio signal when you need livelier guitars, punchier bass lines, a tighter snare, or a cleaner vocal sound. However, it can take countless hours to master the complexities of even the most basic outboard compression units and use them effectively. Originally a Yamaha innovation, 1-knob compressors are now an industry standard that gives you instant access to optimized compression settings via a single rotary control.

EQ and High-pass Filters
There's nothing more useful than reliable equalization when you need nuanced management of your tone. The MG Series benefits from Yamaha's unparalleled experience in designing pro audio gear, featuring 3-band equalizers on all mono channels for precise control of your sound. High-pass filter allows you to eliminate unwanted low-frequency noise, for a smoother, cleaner mix.

AUX / Effect Sends / Group
MG Series mixers feature up to AUX sends for expanding your sound reinforcement or recording setup, allowing you to incorporate additional effects, output to external recording devices, or feed to an monitoring system. Master send controls are also provided. The MG06 / 06X and MG10 / 10XU have a single stereo bus. All other models additionally feature one or two stereo group buses and outputs that can be used for convenient channel grouping. Assign switches for the stereo and group buses are located next to each channel fader.

Built to last
For gigging, recording, and installed applications alike, your console can be subjected to a wide range of environmental conditions and hazards. Excessive humidity, unstable power supplies, and the rigors of road travel in general can take a serious toll on a mixing console, often causing expensive, time-consuming repairs, and reducing its lifespan. The MG Series has been redesigned with an emphasis on durability, incorporating practical features that offer greater flexibility while ensuring peak performance for many years to come.

Metal Chassis
Built to last, MG Series mixers feature a rugged, impact-resistant, powder-coated metal chassis, offering an unrivalled level of durability. With a sleek design contoured for optimal convection cooling, the internal layout separates the power supply from the analog circuitry for superior noise reduction, and further extends the life of the components inside. To further ensure reliable performance, knob control placement above the surface of the chassis diverts any impact or pressure on the knobs to the chassis itself and not the circuit board or components underneath.

Rack Mount Kit Included
Easily adaptable to a diverse range of installed and portable applications, the 16- and 20- channel models of the MG Series included rack ears, giving you the option of a rack-mounted or desk-top configuration. Extremely durable, their sleek design makes safe, stable placement of your console hassle-free, keeping setup time and effort to a minimum. *Optional Rackmount kit "RK-MG12" available for MG12/MG12XU.

The Yamaha MG06 Digital Mixing Studio is a mixing console with an analog-like mixing interface that boasts ease of operation for professional-quality recording and mixdown. Connecting a computer to the mixer's IEEE 1394 port enables you to configure an ideal recording environment with seamless integration into Cubase 4.

The mixer can handle up to 12 analog channel inputs, mixing them to stereo outputs and the 16 in/out FireWire connection to record them in a digital audio workstation (DAW). Each monaural input jack features an XLR jack with a phantom power supply and a newly developed compressor that adopts Sweet Spot Morphing technology with various compressor presets. One input supports Hi-Z input for direct connection of an electric guitar or bass. All input channels feature a full 3-band (high/mid/low) equalizer and share a built-in digital reverb.

For monitoring purposes you can connect three monitoring speakers (each stereo) to the mixer. If a computer is connected to the n12, you can monitor the sound from Cubase or another DAW in a 5.1 surround-sound environment.

With Cubase AI 4 a special version of Cubase 4 is included in the package so that you are ready to plug in and record.

Ease of operation
Analog-like mixing interface enables you to bring your sonic imagery into reality. The mixer can handle up to 16 channel inputs mixing them to stereo outputs. Each monaural input jack features an phone and XLR jack with a phantom power supply, which enables you to connect a wide range of instruments and devices, from condenser microphones to synthesizers and other line-level instruments. Input channel 8 supports Hi-Z input for direct connection of an electric guitar or bass.

Computer connection via a single IEEE 1394 cable
A single cable can do the trick. Connect a computer with an IEEE 1394 port to the n12 using an IEEE 1394 cable to transfer audio and MIDI signals between the mixer and Cubase or other DAW.

Link with Cubase
Install Cubase 4 (Cubase 4, Cubase Studio 4, or Cubase AI 4) on the computer, and the n12 will link to Cubase and operate together seamlessly. For example, you can record the n12 input signals to Cubase as is, or mix Cubase audio tracks on the n12. You can also turn on and off the monitor for the VST effects or control the transport section and tracks remotely from the n12.

High-end sound
Based on the examination of existing head amp circuits, a new head amp circuit has been developed that provides higher quality and superior musical characteristics. The Pad switch turns each channel pad on and off. When it is turned on, the input signal is attenuated by 26 dB. Use the high pass filter to cut off frequencies below 80 Hz. With the Phase switch you can invert the phase of the channel's signal.

Three-band EQ on each channel
Each input channel features a full 3-band (high/mid/low) equalizer, providing easy sound-shaping to suit your preferences. The Mid band is semi-parametric to offer you a more detailed control over the sound.

Digital reverb at your service
A built-in digital reverb can be shared by all input channels. If a computer is connected to the mixer, you can also apply digital reverberation to output from Cubase or another DAW, as well as to microphone and other instrumental sounds.

Use Aux Send 1 to route the channel's signal to the Aux bus. Use this control when you are sending a mix monitoring signal to the musicians, or connecting an external device, such as an effects processor.

Soloing and muting
The Solo switch turns the Solo function on and off. Turn this switch on, if you want to listen to certain channels without changing the mix contents or signal path.

Use the On switch to turn each channel on and off (muting). When the switch is turned off, the channel signal will be sent only to the AUX bus.

Use the REC and the ST switches to route the channels signal either to the recording bus and/or the stereo bus.

With the Wet Switch you can determine if you want to hear the dry input signal from the analog input of the channel or the wet signal coming back from the computer, processed by VST effects or such.

Control Room monitoring function
The n12 features a monitoring function dedicated to the control room (Control Room Monitor function). You can connect three monitoring speakers (A, B, or C, each stereo) to the mixer and select, which source you want to monitor. If a computer is connected to the n12, you can monitor the sound from Cubase or another DAW in a surround-sound environment. (In order to monitor in a surround environment, you'll need a surround-capable application such as Cubase 4. The included Cubase AI 4 does not support surround.)

The Talkback switch activates the built-in microphone so that you can talk to the recording artist listening to the monitor signal in the recording room.

DAW remote control function
This section features switches to remotely control the basic functions of the DAW software connected to the n12. Transport controls, track select controls, controls to engage the recording status, and others.

The n12 supports three different modes of the way it works together with the connected DAW: In the Stereo Mix mode the n12 will monitor the Stereo Output from the DAW. The Hardware Mix mode enables you to mix the audio tracks from the DAW through the hardware of the n12. In the 5.1 Mix mode you are able to do a surround mix with Cubase 4.