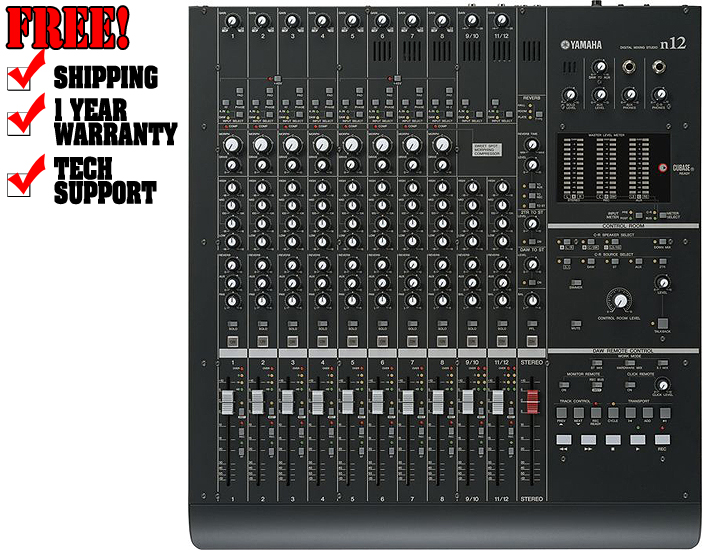 TWO YEAR FULL WARRANTY. ONLY $30 A YEAR FOR FULL PEACE OF MIND. ENJOY YOUR EQUIPMENT WITHOUT WORRY. PLAY WITH IT AND IF ANYTHING IS WRONG, IT WILL BE FIXED. Details

WARRANTY SPECIAL
TWO YEAR FULL WARRANTY. ONLY $30 A YEAR FOR FULL PEACE OF MIND. ENJOY YOUR EQUIPMENT WITHOUT WORRY. PLAY WITH IT AND IF ANYTHING IS WRONG, IT WILL BE FIXED. Details

The Yamaha n12 Digital Mixing Studio is a mixing console with an analog-like mixing interface that boasts ease of operation for professional-quality recording and mixdown. Connecting a computer to the mixer's IEEE 1394 port enables you to configure an ideal recording environment with seamless integration into Cubase 4.

The mixer can handle up to 12 analog channel inputs, mixing them to stereo outputs and the 16 in/out FireWire connection to record them in a digital audio workstation (DAW). Each monaural input jack features an XLR jack with a phantom power supply and a newly developed compressor that adopts Sweet Spot Morphing technology with various compressor presets. One input supports Hi-Z input for direct connection of an electric guitar or bass. All input channels feature a full 3-band (high/mid/low) equalizer and share a built-in digital reverb.

For monitoring purposes you can connect three monitoring speakers (each stereo) to the mixer. If a computer is connected to the n12, you can monitor the sound from Cubase or another DAW in a 5.1 surround-sound environment.

With Cubase AI 4 a special version of Cubase 4 is included in the package so that you are ready to plug in and record.

Analog-like mixing interface enables you to bring your sonic imagery into reality. The mixer can handle up to 16 channel inputs mixing them to stereo outputs. Each monaural input jack features an phone and XLR jack with a phantom power supply, which enables you to connect a wide range of instruments and devices, from condenser microphones to synthesizers and other line-level instruments. Input channel 8 supports Hi-Z input for direct connection of an electric guitar or bass.

A single cable can do the trick. Connect a computer with an IEEE 1394 port to the n12 using an IEEE 1394 cable to transfer audio and MIDI signals between the mixer and Cubase or other DAW.

Install Cubase 4 (Cubase 4, Cubase Studio 4, or Cubase AI 4) on the computer, and the n12 will link to Cubase and operate together seamlessly. For example, you can record the n12 input signals to Cubase as is, or mix Cubase audio tracks on the n12. You can also turn on and off the monitor for the VST effects or control the transport section and tracks remotely from the n12.

Based on the examination of existing head amp circuits, a new head amp circuit has been developed that provides higher quality and superior musical characteristics. The Pad switch turns each channel pad on and off. When it is turned on, the input signal is attenuated by 26 dB. Use the high pass filter to cut off frequencies below 80 Hz. With the Phase switch you can invert the phase of the channel's signal.

The n12 includes a newly developed compressor that adopts Sweet Spot Morphing technology. The mixer provides various compressor presets that represent the condensation of extensive professional engineering experience. Your sound can be at pro level instantly with an easy operation. Use the Morph control to select from the different compressor settings (or morphed settings between them) and the Drive control to determine the amount of compression.

Three-band EQ on each channel

Each input channel features a full 3-band (high/mid/low) equalizer, providing easy sound-shaping to suit your preferences. The Mid band is semi-parametric to offer you a more detailed control over the sound.

Digital reverb at your service

A built-in digital reverb can be shared by all input channels. If a computer is connected to the mixer, you can also apply digital reverberation to output from Cubase or another DAW, as well as to microphone and other instrumental sounds.

Use Aux Send 1 to route the channel's signal to the Aux bus. Use this control when you are sending a mix monitoring signal to the musicians, or connecting an external device, such as an effects processor.

The Solo switch turns the Solo function on and off. Turn this switch on, if you want to listen to certain channels without changing the mix contents or signal path.

Use the On switch to turn each channel on and off (muting). When the switch is turned off, the channel signal will be sent only to the AUX bus.

Each input channel features a 100mm fader volume control, each equipped with an input meter consisting of four LEDs.

Use the REC and the ST switches to route the channels signal either to the recording bus and/or the stereo bus.

With the Wet Switch you can determine if you want to hear the dry input signal from the analog input of the channel or the wet signal coming back from the computer, processed by VST effects or such.

The n12 features a monitoring function dedicated to the control room (Control Room Monitor function). You can connect three monitoring speakers (A, B, or C, each stereo) to the mixer and select, which source you want to monitor. If a computer is connected to the n12, you can monitor the sound from Cubase or another DAW in a surround-sound environment. (In order to monitor in a surround environment, you'll need a surround-capable application such as Cubase 4. The included Cubase AI 4 does not support surround.)

The Talkback switch activates the built-in microphone so that you can talk to the recording artist listening to the monitor signal in the recording room.

This section features switches to remotely control the basic functions of the DAW software connected to the n12. Transport controls, track select controls, controls to engage the recording status, and others.

The n12 supports three different modes of the way it works together with the connected DAW: In the Stereo Mix mode the n12 will monitor the Stereo Output from the DAW. The Hardware Mix mode enables you to mix the audio tracks from the DAW through the hardware of the n12. In the 5.1 Mix mode you are able to do a surround mix with Cubase 4.