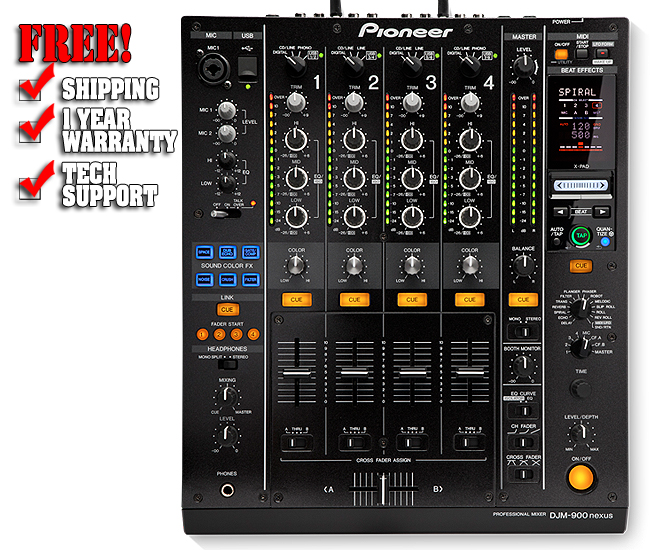 WARRANTY SPECIAL
TWO YEAR FULL WARRANTY. ONLY $45.5 A YEAR FOR FULL PEACE OF MIND. ENJOY YOUR EQUIPMENT WITHOUT WORRY. PLAY WITH IT AND IF ANYTHING IS WRONG, IT WILL BE FIXED. Details

WARRANTY SPECIAL
TWO YEAR FULL WARRANTY. ONLY $45.5 A YEAR FOR FULL PEACE OF MIND. ENJOY YOUR EQUIPMENT WITHOUT WORRY. PLAY WITH IT AND IF ANYTHING IS WRONG, IT WILL BE FIXED. Details

The 4-channel 96kHz/24-bit soundcard streams all audio signals with no loss of sound quality – and being Traktor Scratch Certified, the DJM-900nexus unlocks DVS control. DJs can connect one USB cable and control Traktor with Timecode CD and/or vinyl, directly through the mixer.
6 stunning studio-quality Sound Color FX expand upon the previous 4 and add extra dimensions to any DJ set. With a dedicated FX processor for each of the 4 channels, it raises the bar once more. An overhauled Beat Effects section further enhances the potential for mind-blowing arrangements: 5 new effects, a revolutionary level of control and Pioneer simplicity will rival any other system.

The new built-in X-Pad brings instant one-finger Beat Effects performances. Users of the CDJ-2000 and CDJ-900 can hit the DJM-900nexus Quantize button to lock all these new effects to the Beatgrid of the playing deck.
The DJM-900nexus layout is the industry's most intuitive, most widely used and most creative. With the new plug-and-play software connection that makes DJ transition a breeze, the result is a next generation mixer that is ready for professional DJ booths the world over.

Engineered to bring studio quality sound and sequencer style tricks to the club, six new beefed-up effects turn creative vision into a reality at the twist of a dial. In addition to the essential FILTER and CRUSH, the DJM-900nexus boasts four new modern effects.
Overhauled Beat Effects add a whole new level of control
On top of the 6 super-easy Color FX on each channel, the channel-assignable Beat Effects bring a whole new level of control – making extreme processing more reliable and creative with instant results. Let's start off with the new control interface:


New fader technology and fader caps will make the DJM-900nexus last for even longer.
New High Quality Effects for a digital generation
These include Reverb, Spiral, Slip Roll, Melodic and Midi LFO.

Fully TRAKTOR™ compatible for plug-and-play simplicity
TRAKTOR™ users can connect their PC to the mixer via a single USB port – conveniently located on top of the unit - to get direct input from Traktor's 4 decks and enjoy all of its features.

Advanced design for accurate reproduction of audio sources
The DJM-900nexus is equipped with the same high-quality audio input and output circuits as the DJM-2000.

Back to Pioneer DJ Mixers

Back to DJ Mixers