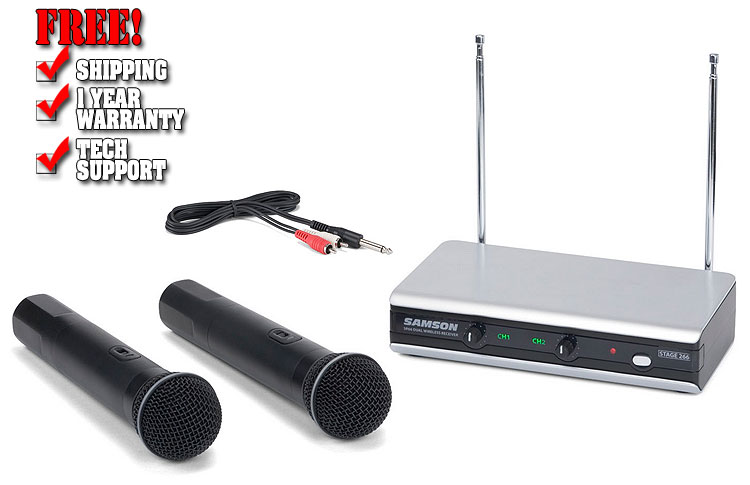 Two Is Better Than One.
Designed for twice the versatility, Samson's Stage 266 Dual Handheld Wireless System let's you use two microphones simultaneously with a single receiver. It's the ideal wireless solution for two vocalists, karaoke, DJs or any application where two mics are needed.
At the core of the Stage 266 system is the SR266 half-rack dual VHF wireless receiver. The receiver's front panel features an RF channel indicator and a large rotary volume knob for each channel. Its rear panel offers two tuned antennas, as well as 1/4-inch outputs for both mix and individual channel output options. The Stage 266 system comes with a 1/4-inch to 1/4-inch and a 1/4-inch to RCA cable.
The Stage 266 system includes two HT6 handheld microphone transmitters. Each transmitter features an H6 dynamic mic element to capture clear, accurate vocals. Each mic operates for up to ten hours on a single 9-volt battery (two included) and offers a convenient audio on/off switch.
With the meticulous engineering, state of the art technology and impressive audio capabilities that are built into every Samson wireless system, the Stage 266 system ensures crystal clear operation and the most dependable dual-channel performance available.

Everyone loves a duet.
The beauty of the Stage 266 system is that you can have both channels running simultaneously. This makes it perfect for a variety of scenarios where multiple voices exist, including bands with multiple singers. Beyond the system's ability to capture stunning vocals in musical settings, Stage 266 allows bands, duos and other small musical groups to add energy and movement to their performances.

Masters of karaoke.
The Stage 266 system is great for opening up your karaoke events to more people. With a second channel in play, you can spread out the stage and avoid people from crowding around a single mic to belt out those rock anthems or duet ballads. And when an MC is running the show, the Stage 266 system really helps with presentation and flow, eliminating the need to hand-off the lone mic after every song.

Double DJs.
For DJs who work in teams, the Stage 266 system is a must. Whether at weddings, block parties or clubs, this wireless system allows one DJ to focus on hyping up the crowd, while the other supports him from behind the mixer. Or you can have two mobile DJs working different parts of the venue. Either way, the Stage 266 makes for a really versatile and entertaining DJ setup.

Escape the podium.
Not only is Samson's Stage 266 ideal for public speakers looking to shed the restraints of cords and wires, but for presentations that involve two speakers at once. From company meetings and corporate events to product demonstrations and Q&A sessions, the Stage 266 system allows small groups to be more interactive in conveying their ideas to an audience.
Thanks to Samson's Stage 266, the freedom of wireless is available wherever two voices are better than one.